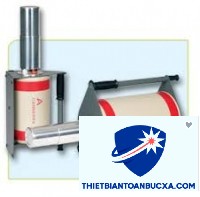 Chi tiết:  Germanium detectors are semiconductor diodes having a p-i-n structure in which the intrinsic (I) region is sensitive to ionizing radiation, particularly x rays and gamma rays. Under reverse bias, an electric field extends across the intrinsic or depleted region. When photons interact with the material within the depleted volume of a detector, charge carriers (holes and electrons) are produced and are swept by the electric field to the P and N electrodes. This charge, which is in proportion to the energy deposited in the detector by the incoming photon, is converted into a voltage pulse by an integral charge sensitive preamplifier.

Because germanium has relatively low band gap, these detectors must be cooled in order to reduce the thermal generation of charge carriers (thus reverse leakage current) to an acceptable level. Otherwise, leakage current induced noise destroys the energy resolution of the germanium detector. Liquid nitrogen, which has a temperature of 77 °K is the common cooling medium for such detectors. The germanium detector is mounted in a vacuum chamber which is attached to or inserted into an LN2 Dewar. The sensitive detector surfaces are thus protected from moisture and condensible contaminants.